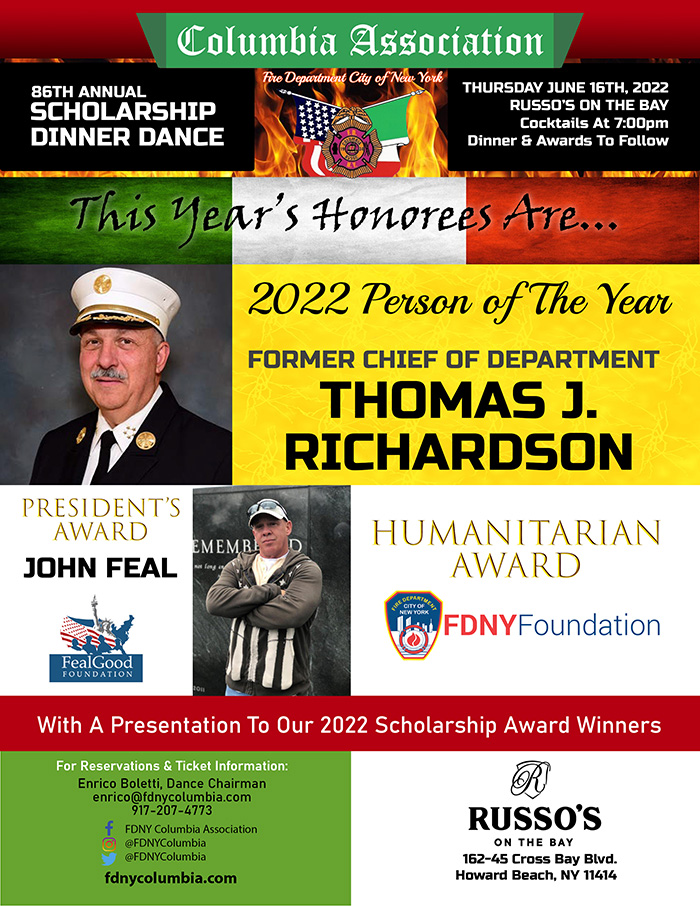 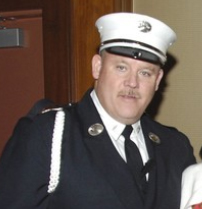 Joseph LaPointe was born in the south Bronx and was the oldest of 7 children, his Dad a Firefighter in the Bronx and his Mom a homemaker.  He grew up in Great Kills on the south shore of Staten Island and currently resides in Annadale with his wife Linda and their three children, Thomas, Teresa, and Tara.

He began his civil service career in 1982 as a NYC corrections officer and in 1984 transferred to the NYPD as a police officer assigned to Manhattan’s Midtown North Precinct.

In 1990, he was appointed to the NYC Fire Department and was assigned to Brooklyn Ladder 109.  In January 2001, he was promoted to Lieutenant and assigned to the Fire Academy as an instructor.

On the worst day in the history of the NYC Fire Department, September 11, 2001, 343 firefighters made the supreme sacrifice and thousands of innocent civilians perished. Immediately following the disaster, the entire academy staff was assigned to the World Trade Center to begin in the rescue recovery effort.

In October of 2001, Joseph was asked to lead the ceremonial team that would conduct the funerals that took place in Brooklyn and Staten Island.  On December 31, 2001, he was assigned to Ladder 114 “Tally Ho” in Sunset Park, Brooklyn and continued as a member of the Ceremonial Unit.

In 2004, he was asked to be the executive officer of the Ceremonial Unit and in 2007 became the Commanding Officer. He oversees a staff of 280 fire and EMS officers, firefighters, EMTs and paramedics.   His responsibilities include planning and executing over 800 events annually such as graduations, promotion ceremonies, parades and their most solemn and important work, line of duty funerals.

He is proud of his 38 years of public service and to be a part of such a great unit working side by side with some of the most extraordinary and dedicated members of the department.

Son of Italian immigrants Rocco & Antoinetta, Captain Frank Vignali was born August 26, 1954 in the Bronx NY. As a child of 1st generation Italian heritage, Captain Vignali was taught to speak & understand the English language at a very early age. He was quickly instilled with strong core values which included an emphasis on hard work, responsibility & respect. Along with his 2 siblings, Rosario & Johanna he demonstrated these traits throughout his childhood. While working at his parents’ Italian restaurant he learned to appreciate his heritage. He was amazed at how well they took care of their family & at the same time maintain a steadfast work ethic for 25 years. However, he knew in order to do so, his parents were forced to spend countless hours at their restaurant. Often, when he & his siblings were not at work, Captain Vignali would have to look after his younger brother & be the “man of the house” for his older sister.

Captain Vignali’s solid foundation propelled him to excel in his education. He attended grammar school at St. Lucy’s Roman Catholic Church, where he was also an Altar Server. He went on to Cardinal Hayes High School, where he became an avid athlete in various sports. His younger brother would often say that he was “quite the ladies’ man”. He finished his school days at John Jay College, where he obtained a Bachelor of Science Degree in Criminal Justice. He had always wanted to serve the City as a Police Officer. He was an apprentice carpenter in a cabinet store, a delivery boy for a local liquor store & a salesman in a piano store. In 1977, he married his wife Debbie.

In 1978, despite his criminal justice degree, a fiscal crisis in the city led to a Police Department hiring freeze. With no prior knowledge or training in the field, Captain Vignali went on to still became a public servant, but as a NYC firefighter instead. He scored in the highest percentile & was hired immediately. After joining the ranks of the Bravest, he quickly adapted to his new career. He was assigned to then, Engine Company 41 in the South Bronx, where he would return to the area of his family’s restaurant. He & his wife were also expecting their first child. Despite success & joy in his new career, it was during this time that Captain Vignali would lose his father. He passed unexpectedly in the restaurant that he had worked so hard to maintain. Captain Vignali once again became “the man of the house”, this time not only to his brother & sister but now to his wife & newborn son as well.

He went on to spend 12 years in 41, one of the busiest fire companies in the world, having to respond to 7,000 runs a year. It was an era known as “The Bronx was Burning”. He then was assigned to Tower Ladder 51 where he spent 18 years. It was in the “Dawg House” where his leadership skills became second to none. His love for sports flourished again. Engine 38 & Ladder 51 achieved several Bronx Softball Championships during his tenure.  In 2013 he was promoted to Captain & was assigned to the 7th Division, once again in the Bronx. He is currently the Executive Officer of Division 7, where he oversees the daily operations of the North Bronx fire companies.

His career has come full circle, beginning & (soon to be) ending in the Borough that he calls home. Captain Vignali is currently is in 40th year with the Department, which includes (2) Service “B” ratings, (3) Unit Citations & a long stint of rescue operations at the World Trade Center. Throughout his career, he has volunteered on his own time to speak to students of all ages, as well as seniors on the importance of fire safety & prevention. He is long time member with the FDNY Columbia Association, which raises money for various Italian American scholarships. His aggressive personality & assertive attitude has said to have filled many seats at the Bronx Columbia Association Meetings.

His service is not just limited to the Fire Department. He has simultaneously volunteered his time serving various schools & organizations. He has been recognized by the NYC Council for his time working with residents of the Community Resource Center for Developmentally Disabled. His devotion to the sport of baseball is unwavering, having coached at Van Nest Little League in the Bronx for the past 30 years where he is still active today. The League has honored him with numerous longevity awards throughout his coaching career. Besides coaching, he was also involved in children’s education by serving at his local parish’s school as a member of the St. Francis Xavier Home School Association for 18 years. In 2011, He received The Philip J. Abinante Community Service Award from FIAME, which is the Forum of Italian American Educators, an organization comprised of teachers, supervisors & all school-based personnel of Italian American descent. Captain Vignali also belongs to both the Morris Park & Allerton Avenue Community Associations & helps coordinate the borough’s Columbus Day parade & will serve as Grand Marshall later this year.

He currently resides in Morris Park where he continues to serve his community & neighbors. His biggest achievement has always been taking care of his family. In July of 2017, tragedy struck again as Captain Vignali’s sister, Johanna, who stood by him throughout his life’s journey, passed away suddenly at age 65. Devastated & heartbroken, he once again became the “Man of the House”. This time it was for his younger brother, his own family & now for his several nieces & nephews. On October 14, 2018 Captain Vignali celebrated his 40th Anniversary of being a NYC Firefighter. He was 4th in seniority (in the entire Department) as of that date. He has now been married for 42 years. His oldest son Christopher is also a NYC Firefighter with 18 years on the job. He is assigned to Engine 90 in the & is currently on the Lieutenant’s list. His younger son is a NYC Police Officer with 7 years of service, serving in the 45 Precinct.

Legacy Advisors Financial Group was established in 2008 with our members having over 100 years combined experience in the financial industry. We are a team of financial advisors with unique areas of expertise. Whether it’s Life Insurance, Disability Insurance, Retirement Planning, Investing or business needs, our team has you covered.

We feel that it is very difficult to work alone in this industry and service your clients effectively. The products, rules and regulations change rapidly and clients need timely communication more than ever.

With out TEAM concept, we always have someone available that specializes in your area of concern. In these uncertain times, our TEAM is always there for you, your family and your business.

“It is our goal to provide families and businesses with assistance in building their financial freedom. We have the skills, knowledge and experience required to meet our client’s established goals. Built on a foundation of integrity, honesty and the highest ethical values, our practice will serve as a lifetime resource for each and every client”

OUR RELATIONSHIP WITH THE COLUMBIA ASSOCIATION

Legacy Advisors Financial Group has worked with the Columbia Association for over 10 plus years. During this time, we’ve built a relationship with its members based on trust. The Board of Directors know the value that we bring to their members and are kind enough to allow us to attend every meeting since we’ve been involved. We believe this is where we’ve built so many lasting relationships and built the trust we’ve attained. If you don’t see us at a meeting, you may see us grilling at the annual bocce tournament or a NY Mets game. We also provide seminars to all members of the FDNY providing valuable education on their pensions and retirement planning in general.

Legacy Advisors Financial Group believes in education and what it means to earn and achieve all that you can in life. We believe in leaving a legacy behind, and for those reasons, we have been proud supporters of the Columbia Association Scholarship Fund. We are privileged to be part of the next generations success and we congratulate this year’s recipients.

We feel honored and grateful to receive the 2019 Humanitarian Award. This specific award lets us know that the Columbia Association, the Board of Directors and its members feel that we are more than just financial advisors. That alone, means everything to us. We want to thank everyone involved in this decision and want to also congratulate tonight’s other award recipients.

The 2019 Memorial Scholarship is presented in Memory of